The United Nations Food and Agriculture Organisation, estimates that around 795 million people out of the 7.3 billion people in the world, were suffering from chronic undernourishment in 2014-2016.  That’s about one in nine people on earth not having enough food to lead a healthy active life; with 3.1 million children dying due to malnutrition every year.

To make matters even worse, the amount of food that goes to waste is reprehensible; roughly 1/3 of global food production – approximately 1.3 billion tonnes a year – gets lost or wasted!  The carbon footprint of this wastage is estimated at 3.3 billion tonnes of CO2 equivalent of GHG released into the atmosphere per year.  The total volume of water used each year to produce food that is never eaten is 250km3, equivalent to three times the volume of Lake Geneva.

Similarly, 28% of the world’s agricultural land is used annually to produce food that is never used.  The consumption of natural resources for produce which primarily ends up in landfills is shameful; not to mention the economic consequences of food waste running into the billions, over £6 billion a year!

Yet a lot of food is also wasted at home, because of unwanted leftovers, partially used food, food that has passed its use by date or best before date, over shopping, change of dinner plans, etc.  But let’s be food smart and cut back on food waste; not only will it benefit our environment, it will also save you money.

The amount of food waste produced globally each year is more than enough to feed the nearly 1 billion hungry people in the world.

So how do we do this?

Super Easy Ways To Cut Down On Food Waste

Super Easy Ways To Cut Down On Food Waste

Combating food waste is an essential part of meeting the food demands of a growing population.

Thankfully there are many ways we can help to make a difference and reduce the impacts of food production and consumption on our health, the environment and on livestock.

One key solution is to REDUCE, REPLACE & REFINE: 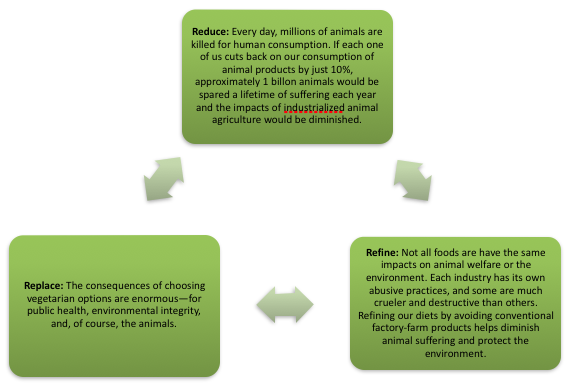 Other solutions include shopping for produce grown close to Gibraltar; as less fossil fuel is used for its transportation.  You can choose organic over non-organic food.  Organic food is produced without using chemicals which reduces water, soil and air pollution.  Furthermore, organic farming works in harmony with nature; rather than driving wildlife away, organic farmers attract them to their land as they play a key role in pest prevention and management.

By choosing to eat more plant-based foods you can drastically cut your carbon footprint, save precious water supplies and help ensure that vital crop resources are fed to people, rather than livestock.

Additionally, organise yourself so that you don’t produce any food waste and always recycle your food packaging!

Remember that as consumers we each have the opportunity to make a difference and help our planet, improve our health and the quality of life of livestock.