Understanding climate change is important for everyone. Throughout history, the Earth’s climate has been changing, reflecting the complex interactions between the solar, oceanic, terrestrial, atmospheric and living components that make up the Earth’s systems.

The world has experienced cycles of warming and cooling in the past, in which global average temperatures have fallen and then risen again by about 5°C, each time taking the earth into an ice age and then warming it again. This cycle is associated with regular changes in the Earth’s orbit which change the intensity of solar energy it receives. The Earth’s climate can also change abruptly, sometimes due to sudden events like volcanic eruptions. Species and ecosystems have either adapted to these past variations or become extinct.

We now know that human activities such as burning fossil fuels and clearing large areas of forest have had a profound influence on the Earth’s climate. The planet is definitely warming, our atmosphere is now 0.7°C warmer than in 1950. The oceans are also warming.

Warming has been strongest in the Arctic, where sea ice is disappearing and permafrost is melting. The extent of sea-ice loss is unprecedented in 2000 years.

Weather is becoming more extreme although it is hard to tell how much of it is due to climate change and how much down to natural variability. Sea levels are rising as warmer oceans expand and melting ice runs into the sea. The current rate is around 3cm a decade which threatens populated coastal areas. Scientists also fear that natural processes could accelerate the warming. For instance, melting permafrost may release frozen methane which is a powerful greenhouse gas.

There is still considerable uncertainty about how much the world will warm this century, and how fast. Much depends on whether we can curb rising emissions of CO2, as the gas stays in the air for centuries. To keep below an average 2°C of warming, which is thought to be the most society could cope with, we probably need to stop total releases from human activity since the industrial revolution rising above a trillion tonnes of carbon. We are now about halfway there.

Cities face particular challenges when it comes to climate change – 75% of the population in Europe live in urban areas and this is where the effects of climate change will be most evident in everyday life. Urban settings can exacerbate climate change impacts – artificial surfaces and buildings create unique microclimates; impervious roads and pavements can generate or worsen flooding; high levels of artificial surfaces can store heat and raise temperatures within city centres as compared to surrounding areas.

It is therefore equally important to prepare to adapt to the inevitable effects of climate change as it is to try to mitigate these through emissions reductions.

Although no Gibraltar specific studies have been conducted to date to determine the likely impacts of climate change, data from the IPCC reports suggests that, along with the rest of south west Europe, Gibraltar is likely to suffer from increased risk of flooding due to sea level rise, hotter summers and wetter winters with an increase in the occurrence and severity of extreme weather events.

Gibraltar is, in many respects, already quite resilient to climate change due to the fact that, for historical political reasons it has had to develop a high degree of self-sufficiency. There are also measures which have been undertaken over the years which, although never specifically identified as climate change adaptation, have nonetheless served as such.

Examples of Gibraltar’s adaptive actions include:

What is Gibraltar Doing To Help Fight Climate Change?

Gibraltar set up an advisory Climate Change Forum in 2008. A Climate Change Task Force was then set up in 2014 to determine and implement specific actions to help fight climate change. As part of this, Gibraltar became a signatory to the Global Covenant of Mayors for Climate & Energy in 2015.

This is a global coalition of city leaders dedicated to reducing their greenhouse gas (GHG) emissions, making their cities more resilient to climate change and regularly reporting their progress publically. It was one of the key initiatives launched at the UN Climate Summit in September of 2014 by UN Secretary-General Ban Ki-moon and is the largest collective effort to date by cities to tackle climate change, prepare for its impacts and regularly track and report progress. 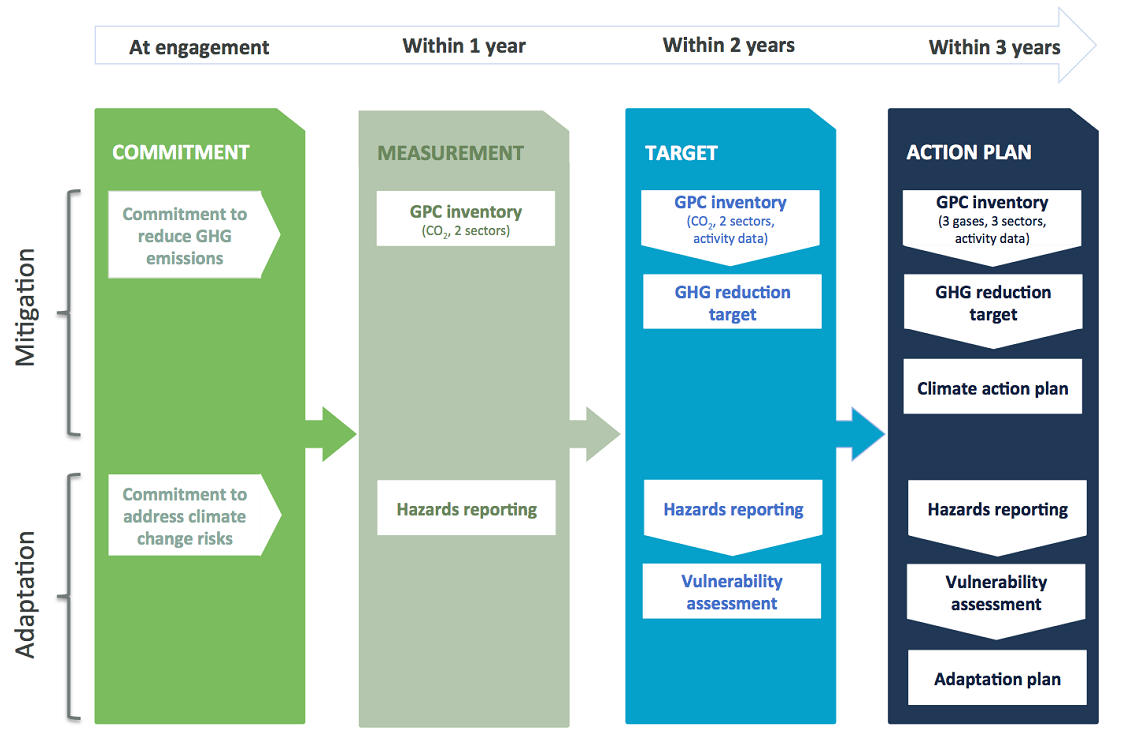 Gibraltar produced its first city level GHG inventory in 2013. The second inventory was conducted for 2015 and will be conducted annually from now on. Gibraltar will this year commit to a GHG reduction target and publish an action plan to achieve that target by the end of 2018.  Many of those actions will be based on improvements to our power generation and traffic situation as detailed in the respective sections on this website.